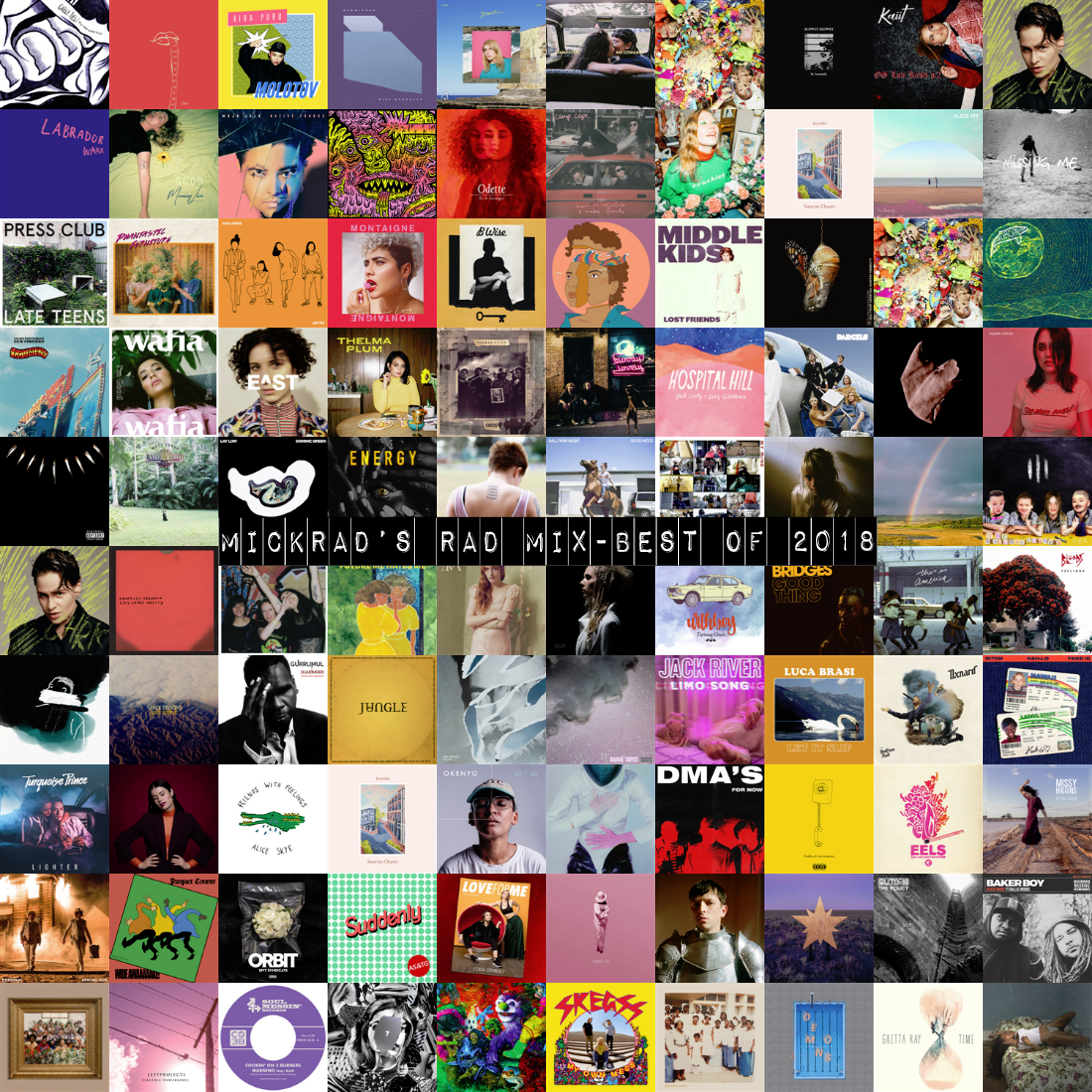 Even though we are surrounded by the turmoil of political upheaval, environment disaster, ignorance and violence, rays of light often poke through the clouds to give us hope, inspiration and confidence that maybe – just maybe – things will be OK.

I set myself a goal this year, to listen to more new music, particularly Australian music, than I ever have before and thanks to you, this blog and the amazing artists in this country (and abroad), I achieved something that I didn’t think I could – maintained a weekly playlist of songs that rotated each week for 50 weeks.

I then made it my mission to compile my own list of 100 songs for this year, perhaps in a little retaliation to another certain 100 list that has become less relevant to my tastes over the years.

After much to-ing and fro-ing, moments of stress, clarity and excitement, I have settled on my list, which admittedly has been manipulated right up until the final day of the year. There are plenty of tracks that were on there and have moved off, but obviously I can’t fit everyone, but I really wanted a wide representation or the music that I’ve loved this year.

The Australian music family should be so proud of what they’ve achieved this year. The scene has diversified more than ever and the collaboration between genres and the proliferation of non-male music has grown more than I can remember – it’s a very exciting time to witness the changes in the local scene.

If you’ve been following my playlist throughout the year, you would have seen that 90-100% of them contain all-Australian artists and, to be honest, this has meant that I haven’t listened to as many international artists as I may have wanted. Whilst I am not sad too about this, I’ve certainly come to the realisation that I am somewhat out-of-touch with some of the overseas scenes. The ones that I have included in the list, though, are the gems that have really caught my ear.

81% of the list is Australian, which is actually a little lower than I would have expected. Ultimately, there are always going to be those huge worldwide hits that wriggle into our periphery. I admittedly won’t feature an international artist in my weekly playlist that already has significant coverage. They don’t need it!

I have included Riton and Kah-Lo as English, even though Kah-Lo is from Nigeria. Parcels, having moved from Byron Bay to Berlin, come under Germany.

When we look at the Australian artists by state, NSW come out on top with over half. This is probably quite swayed by me living in that state, but it’s fair to note that 11 of my top 20 are from VIC, who are the second most represented artists. ACT and QLD coming in next, whilst SA and WA have, sadly, zero representation. I will have to make it a mission to find more artists from these states! (Sorry West Thebarton and Good Doogs, I was very close to including you!)

As I mentioned earlier, the huge number of non-male artists making amazing music in this country is growing year on year. 62% of my list contains at least one non-male artist. This includes groups that may feature a female artist in their track (Space Invadas, REMI, Cookin’ on 3 Burners) even if they are an all-male group usually. It really is such a positive thing to see the amount of up-and-coming non-male artists, but traditionally, the numbers seem to drop with age. Here’s hoping that THAT trend changes as well.

When it came to picking the songs for the list, 90% of it came together really fast as I had been accumulating playlists throughout the year, but then there were those 20 odd tracks that I really wanted to include, but couldn’t fit. Songs from West Thebarton, Washington, Lisa Caruso, BOAT SHOW, Caiti Baker and Rackett all just missed out, but were in there at one point.

Just five artists feature twice in the list. Camp Cope, Christine and the Queens, Joyride, Julia Jacklin and The Presets. This usually happened when I just couldn’t decide which one to include and barring Julia (whose apparently awesome album comes early in 2019), they all have had big albums this year.

I was thinking about writing up a wrap about every song, but damn, who wants to sit at a computer at this time of year! The list is below, followed by a link to the Spotify playlist which is can put on repeat until new music from 2019 starts coming in!

Links to the Spotify playlists are below. Choose your order!