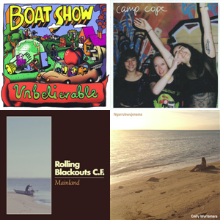 For your fifth week of 2018, I give you this playlist which is ten tracks of juicy new cuts.

I kick it off with BOAT SHOW. One of my favourite live acts of BIGSOUND are back with a new album called Unbelievable and this rocking little tune. Any song that starts with, “You’re a dickhead, trash shit”

2018 will be the year of CAMP COPE…again. These three ladies are something special and this, the title track from the upcoming second album, again proves how smart they are at songwriting. Love the bass, love the lyrics. Love you, CC!

I was slow to get onto the Rolling Blackouts Coastal Fever bandwagon, but I am now well and truly on. This song, Mainland, gets in your head with his twangy little riff and chorus. It feels old and fresh at the same time, but very Australian. Very clever little track.

Emily Wurramara popped up last year with a couple of slick tracks and she returns early this year with this beautiful new track, Ngarrukwujenama (pronounced: nar-deh-goo-jay-na-ma). This track conveys the hurt she feels over the environment that is so important to her, growing up on Groote Eylandt.

Unknown Mortal Orchestra return with a fuzzy new track, American Guilt. I’ve loved this band forever and they continually step it up with each new new track. Distortion, and lots of it, is the name of the game here. NZ brings the goods again.

The Gypsy Scholars have been kicking goals for a few years now. I feel lucky to have played with them in my old band in their home town of Canberra and now they have released this seriously smooth and well-rounded track, Cold Hands. Let them get into your earholes.

Yes, this track goes for 6 and a half mins, but it’s a great chance to get lost. TEES, a duo from Wollongong, combine old-style synth sounds with modern beats. (I guess?) This track is personal to singer, Lizzy Tillman, exploring domestic violence but also strength in the face of oppression.

A new POND song is always something to digest. Fire in the Water is actually a bonus track on their The Weather album, but it seems to have been released as a single just now, so it counts as new-ish. Love the synthy dancing horn riffs. Trippy man!

I love when a band continually re-invents themselves and that’s what Belle & Sebastian keep doing. The Same Star is mostly sung by Sarah Martin and is from the second of their trilogy of new EPs, How To Solve Our Human Problems. Excellent bass, some sweet horn lines and that usual B&S lilt.

Verge Collection have released Feelin’ Old, and it speaks to me. This Perth quartet are releasing a debut album, Flaneur in March and this track weaves around the subject of living your life despite your age. You never known when things will change, so enjoy each day as you can. It’s the only way to go.

See ya next week!