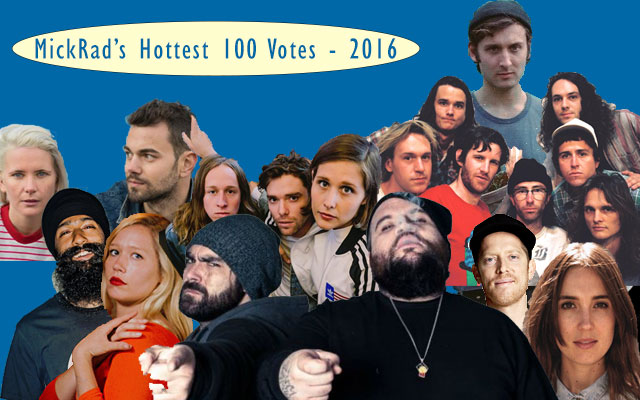 Every year I find that more and more of my choices are Australian, and this year is no exception with 9 of the 10 being Aussie, the biggest ratio yet.

There are so many songs that I wished I could have put in this list and I moved these following ones in and out over the last couple of months.

In the end, these are the tracks that meant the most to me this year and that’s the best you can do, right?

These Sydney ‘kids’ came out of nowhere this year. This song reads like an adventure. The clever lyricism of the song matched by the intricately melodious chorus.

I got all muddled up and journeyed to the edge of town
And then the road cracked open, sucked me in and I went down
We’re standing face to face with the king of the underground
Some things just don’t add up, I’m upside down I’m inside out.

It’s clever, it’s catchy and just the start of something big from this trio lead by the uber-talented Hannah Joy.

They were undoubtedly the buzz band of BIGSOUND this year and their live show was rammed.

It’s exciting when you can jump on the start of a band’s journey, which is actually quite a theme in this year’s votes..

This was the year that King Giz smashed through. Eight albums in and they released their most outstanding work. An album, Nonagon Infinity, that plays nine tracks non-stop and loops from the end to the start. I could have seriously picked one of any of the nine tracks. In fact, the whole album is like one long track. Can’t I just vote for that?

Now think about replicating that in a live environment….They bloody did and it was my standout gig of the year at the Metro Theatre.

This is the first ‘track’ on the album and it showcases the frenetic synchronous dual drumming, the relentless bass and the guitar that attacks, retreats, dances and completes a whirlwind of sound that infiltrates your senses.

My body works, I know
It’s just the same, I know
My only difference
Is robot influence

They are not stopping however. They have revealed that they intend to release five albums in 2017. It’ll make up for 2016 where they only managed one.

But what a one it was.

When a song can give you goosebumps every. single. time, you know you’ve got something special. This song has everything, galloping drums, cool keys, wayward glitchy percussion and a freaking clarinet and flute.

D.D Dumbo (aka Oliver Perry) really created a song (and an album in Utopia Defeated) with such a shit-tonne of layers you can tell he worked hard on it and really achieved what he was a after.

Like Gotye before him, the talent of this man is here, right now. Don’t wait for him to release a catchy, popular song with a female collaborator, get on this music now and appreciate how great he already is.

Just as the band she fronts, Phantastic Ferniture, were starting to hit their stride, Julia released her solo work and boom! Her album, Don’t Let the Kids Win was on rotation for me for most of the last three months of 2016.

Her sound is certainly nothing new, but it’s delivery is so ultra cool and her voice falls in effortlessly with the laid down vibe from her band. For me, it’s the honesty and rawness of the lyrics that grabs me in the warm and fuzzies and won’t let go.

I really struggled to pick a song from this album, but ultimately this track represents everything wonderful from a year that felt like it was slowly pulling us into a pit of helplessness.

I had a chat to her late last year and realised just how much work she’s been putting into her music in 2016. This is no overnight success and will surely not be the last we hear of this talented musician.

If there was ever an ‘it’ person, then Anderson .Paak is the ittiest it person there ever was. You couldn’t turn in 2016 without seeing Paak collaborating with someone great, delivering exquisite live performances or releasing music in alternative guises.

His album, Malibu, matches Kendrick’s for talent but oozes that extra layer of cool. More Ventura, Califiornia than Compton, California and the genres that .Paak plays around with on this album all just seem to work.

The Bird is the opening track and if you’ve never heard it before and it sucks you in, just let it. It’s a special, special album.

I’ve seen L-FRESH live around ten times in the last year and there’s a reason that I can’t get enough. His songs are addictive, they’re passionately written and delivered. He gives a piece of himself into every single performance, but it’s something else. It’s the positively, the uplifting vibes and the damn amazing smile that gets me every time.

The combination of MK-1, Mirrah and L-FRESH on stage hurts my cheeks from the smiling that I do and when this song comes on, I can’t help myself from getting up front and dancing.

The fantastic album, Become, is inspirational and written from the stand-point of promoting people to stand up, take action, but damn, go and dance while you’re doing it.

I will not stop seeing L-FRESH live. I don’t want to lose that feeling or that passion.

The most important (and best) album of the year comes from Adam Briggs and Trials. Reclaim Australia is as important as it is impressively performed, laying down the position, the truth and the bare-bones racism that the indigenous peoples of our country deal with on a daily basis.

I truly believe that his song will be the catalyst for finally changing the date of Australia Day which could snowball to the other changes that this country needs.

We need it all. It’s time. Open your mind and be inclusive. In his non apologetic way, Briggs delivers the most scathing analysis on Australia’s history than any opinion article or report.

They screaming “love it or leave it” (love it!)
I got more reason to be here, if you could believe it
Won’t salute a constitution or who’s underneath it
Turn that flag to a noose, put a cease to your breathing

Dan Sultan provides the powerful chorus for this track and the video is a perfect accompaniment. Hopefully 2017 will be the last year that the Hottest 100 is held on this day. I am it’s biggest fan, but triple j should take the initiative and change the date of it’s countdown to show how easily it can be done.

The Opposite of Us – Big Scary

The piano at the start of this song just makes it. It’s a sublime track, with the voice of Tom Iansek holding this song together just when it feels like it could fall apart.

Their album of this year, Animal, is a perfectly constructed thematic four part masterpiece. From Hunting to Lurking to Resting to Waking, it moves from primal to ethereal within it’s 56 minutes.

This track is nestled in the ‘Resting’ section of the album and is a beacon of light in a sometimes dark album.

You say that you are my love then I’m a believer
You reach a hand out to me then I’m gonna hold it
You fill my eyes with your smiles my brain with you chemicals
I forgot to say, I forgot to say,
I’ll just say something dumb anyway

2016 has been the year of the female singer-songwriter. Whether it be Julia Jacklin, Alex Lahey, Ecca Vandal, Sampa the Great or this artist, Ali Barter, the females are easily outdoing the males in the Australian music scene.

I voted for Ali last year as well and she just keeps producing songs that I can’t help hitting repeat on. 2017 will again be huge as she prepares her debut album for release.

Not only is this a banger of a tune, showcasing Barter’s excellent talent in rocky punky music, but the lyrics remind every woman not to take the shit from a guy that tells them to ‘smile’ or to wear something more ‘revealing’.

In a year where women are starting to be celebrated in our industry more than any other, it was suitable that Urthboy would release an album, The Past Beats Inside Me Like a Second Heartbeat, that celebrates the fairer sex with a series of songs that not only feature awesome cameos from leading ladies, Okenyo, Sampa the Great, Bertie Blackman, Caitlin Park, Montaigne, Jane Tyrrell and Kira Puru but tells his own stories of how women have influenced his life.

Urthboy manages to tie this all together in this track that celebrates his history along with a snippet of stories from his collaborators.

This song feels like a celebration. It’s delivered joyously below as performed at the One Night Stand last year. Urthboy is another of those artists that performs with passion every gig and delivers doses of infectious hooks along the way. He tells a good story too.