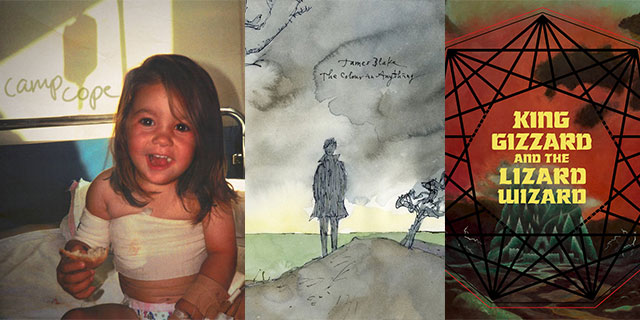 So, unless you’re on another planet, you’ve probably heard that Radiohead have a new album.

Now, I have not yet listened to it, but yes, I’m sure if you’re a fan, you’ve got it on repeat right now. I am one of those ‘I like Creep, but then they lost me’ sort of fans.

Not to say I hate Radiohead, or think that Karma Police isn’t a damn good song, I’m just a bit ambivalent for them.

Also, there is so so much good music going around right now and an even better option to Radiohead.

Firstly, close to home. How good is this Camp Cope self-titled album?

It’s raw, heart-breaking, addictive, very Australian and very well written. When music is sung with angst and the lyrics stand-out and those lyrics are actually beautifully written, you know you have a great album.

“You said something along the line of I Love You…and I probably took it the wrong way..” – Done

Yes, Georgia Maq’s lead vocals sound like a punk Missy Higgins, but that’s not a bad thing at all. It lends to a story-telling voice that you want to listen to. For the softer side of this album, listen to West Side Story and the desperately sad, Song for Charlie.

Next, we go to the UK, Radiohead’s home turf and we bring back something else. James Blake. He  has released his third album after the hugely successful ‘Overgrown’ and it’s a big one.

Seventeen tracks and 76 minutes of ethereal light and dark in the way only Blake can. He’s not afraid to let his vocal stand alone in a stark air of vibration and trembling silence.

I love his ever-growing confidence and the textures that he creates, which sound delicate, but most certainly are not. Everything he does is with such a definiteness that it feels right. Every note, every sound, every electronic touch.

Collaborations are a thing now-a-days and Blake doesn’t hold back. Bon Iver joins him for I Need A Forest Fire and

The prolific and master of modern production, Rick Rubin, produced this album and it’s a match made in heaven. His stripped-back style melds effortlessly with Blake’s minimalistic writing.

Listen with headphones. There is no other option.

Eight albums in, King Gizzard and the Lizard Wizard don’t appear to be slowing down. The seven piece fuzz-rock band from Melbourne must enjoy recording and/or jamming because their albums pretty much just sound like one long jam and they release a new album every 5-6 months.

Nonagon Infinity is all about the title. Nine songs that run in a continuous and infinite loop. It’s not the first time the band have released an album with a loose gimmick. Last year’s first effort, Quarters was a four track album with a running time of 40 minutes and 40 seconds. Fortunately, they have executed the gimmick a lot better this time.