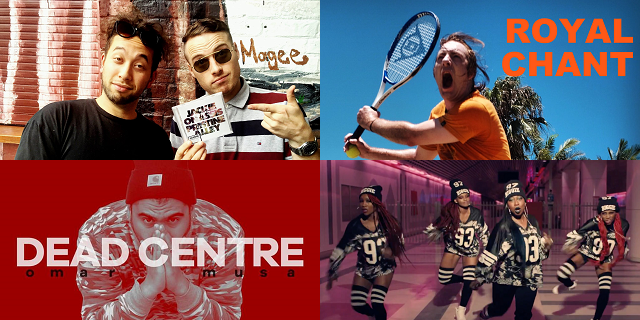 Today there’s a literal plethora to choose from.

Fresh off his wedding, Kai and his other (better?) half Raph of Jackie Onassis have dropped their debut album. No fanfare. No countdown. Just BOOM, there it is! I haven’t even had a change to listen to it properly, but you really should. Their flow is simply sublime.

Royal Chant, one of my fav local indie bands has just dropped their second LP today. If this amazing video of ‘Dick Move’ is anything to go by, this album is gonna from sweet! It’s fuzzy indie-rock, but it’s got the smarts make you smile!

Omar Musa. He’s a writer, a poet, a rapper (check out Monkeykat too) and an all-round top bloke

and he has collaborated with Joelistics for this brand new track! I love that the idea for this came out of a casual chat after a Speech Therapy event that both were at (and I think I ran into them that same night). It’s a perfect mesh of two hugely talented legends. After reading Omar’s work, it’s great to hear his lyrics laid on top of production from one of my favourites in the biz.

Missy Elliott is back! Three years since her last single, she’s dropped this track, ‘WTF (Where They From)’ featuring none other than the man in the hat, Pharrell Williams. She nails this track from every angle and it’s great to see her make such a massive return.