Time to rock this Tuesday Tunesday thing up a bit….

Q: What sort of music can you make with two people that’s not dance music or a White Stripes rip-off?
A: Bloody good loud ROCK music!

I saw Royal Blood play live at The Oxford Art Factory a few months ago and there it was, two guys. One behind the drums, the other with a bass guitar. This is no wanky White Stripes style music though, this was straight ahead ballsy Rock n’ Roll and it blew the venue away.

So, how do they create such an awesome sound? 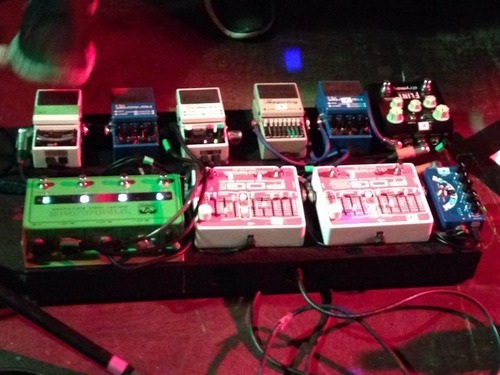 That might look like a pile of wires and buttons to most people, but what we have there are: (from top left to bottom left)

That’s what I could decipher from the Basschat forum.

The triage selector switched between two amplifiers. One guitar and one bass amp. He splits or combines the sound depending on the song, which is why it sounds like there’s a guitar and bass in some parts. He’s actually playing both parts simultaneously (like a lot of bands do anyway). Add in some octave, fuzz, tremolo and reverb and you have one hell of a sound!

They are on the record as never using pre-recordings or additional band members for their music and the way they create their trademark sound is a closely guarded secret. Mike Kerr doesn’t like to discuss it.

Figure It Out is their latest single coming from their self titled début album to be released next week (25th of August). Punchy, unforgiving and very tight. It’s the best rock to come out of the UK in a long time.

Combine that with Kingswood’s début arriving this Friday and we have a bloody good week of balls out rock!