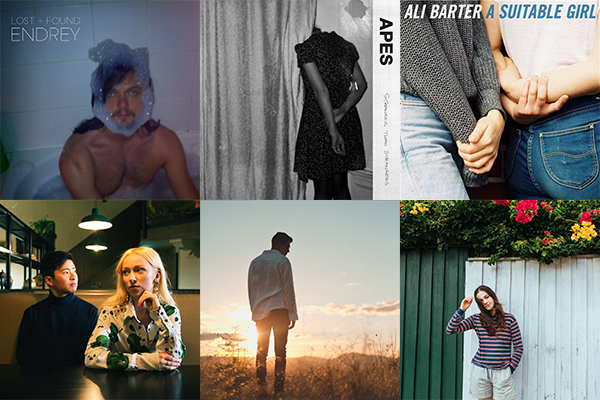 Since my last post, I have had a little bit of a break. I went to Japan for a few weeks, been working my day job and trying to catch up on all of the music I’ve missed over the last month or so!

I’ve also started writing for another website, LunchBox TV. Jump over there to check out my interviews with Paces, Skegss and Spit Syndicate and some reviews. This means that my own blog may be neglected a little, but I’ll try to find the time to keep it going.

I thought it would be great to recap some of the releases of the last month that have caught my ear. There’s so much great music continually being released that it can be hard to keep track!

Firstly, there are three debut albums that have come out recently that need attention.

If you’re from Canberra, attended The Secret Garden Festival this year, or keep your ear to the ground, you’d know Chris Endrey is a man of many..many talents. The band that brought him to the attention of many was Fun Machine. A manic, fun and extremely talented group from Canberra. You really should check out Naked Body. He’s also toured he country with his stand-up comedy show, hosted live variety shows and now released his first solo album.

Lost + Found starts with a sparse piano piece and traverses into a reflective, personal account of Endrey’s ever-wandering mind. The title track takes a indie-rock edge, but retains the piano and the sustained voice of Endrey.

Forever wearing his heart of his sleeve, Chris Endrey’s writing ability is in full display on Go Far, a hopeful and desperate ode to regret and longing.

As Endrey suggests, “Take an evening, draw a bath, light some candles and sink into its reflections as your own.”

The debut album from these Ballaratians (is that right?) is a triumph. If their EP of 2013, Helluva, was anything to go by, you’d expect a raw, rocking debut from this four-piece, but instead this album shows depth, texture and maturity. Starting with Pull the Trigger, we get to experience a direction this album will take. Layered, glistening guitars, driving bass and drums and a delicate, but strong vocal line.

Dimension is a standout old school rock number with a Royal Blood-like riff. The well-trodden track name takes us down a 70’s rock route with bombastic guitar and chorus. We then get to wind it back with Better, a delicate ballad showing off Apes’ lead singer, Benjamin Dowd’s range.

This debut album deserves accolades with the time, effort and thought put into it and surely will place Apes on the map in Australia’s indie-rock scene.

If you’re a reader of this blog, you will already know my thoughts on Ali Barter. Since hitting my radar with her track, Community, in 2014, I’ve been following Barter’s career with keen interest. Each single and EP released has seen her progressing her sound into the dynamic and encompassing sound she displays on this album.

For a debut, there is so much here to like. Barter has a way of building her songs from a straight-ahead simple guitar and vocal line into a big rocking full band tune with chorus that light your endorphins on fire. Opening track, Cigarette, is a perfect example of this.

Not only is the music exceptional, but there is a decided theme running through the cleverly written album. It’s a very real representation of our lives but more specifically, female lives. Not that blokes can’t learn a lot from what this album is saying. Accompanying this, there are a set of video clips that have been released. Simple, effective and very cleverly tying it all together.

So, which singles have come out that I’ve been digging? Check these out.

Asta provides the top-line for this track, but it’s got Yeo’s signature production all over it, including his warn and quirky vocal. It’s as catchy as hell and you’ll want to press play over and over again.

Never Wanted That is about “the challenges of navigating between friendships, romance and business. When a relationship is damaged, who takes responsibility for fixing it?” Sounds like a heavy premise, but this song is anything but heavy, it’s just damn fun.

Yeo is on the verge of releasing a new album, Desire Path, on the 18th of August and promises more collaborations and almost certainly more damn funky beats. Get on board.

Daniel Kirkland is an MC from Canberra that caught my ear six months ago, supporting Coda Conduct at Transit Bar. His dynamic and direct voice makes you stop and notice for it’s impressive rhythm and timing, and it works so well over the unique production. He’s teamed up with various top-grade producers, including Cam Bluff, Tigerilla and Mondecreen, but it’s the lyrics that stand out.

There’s a definite old-school vibe to his flow and that pulls me in, but this latest single has a big sound that establishes Kirklandd into the scene and will surely make people take notice.

Ultimately, there is not better source of new Australian music than triple j’s unearthed. The amount of music that is uploaded there every week is staggering and it can be hard to navigate, but sometimes the cream immediately rises to the top. Ruby Fields is a big dollop of dairy goodness that spread out quickly on the top.

Within hours of being uploaded, this track was spinning on national radio and there’s little wonder why. I Want is a pumping rock tune with strong vocals, not something you may expect from a 19 year old residing in Sydney’s southern beaches. She also seems to be smart, talented and damn nice if you watch this video.

Bear in mind, this is her FIRST SONG. To come out with something like this shows she has is not only hugely gifted, but has some good support around her. Can’t wait to see what comes next from the future of Aussie music.

That’s just a sample of what I’ve been listening to over the last couple of months. Look out for more regular updates and links to album and live reviews and articles!