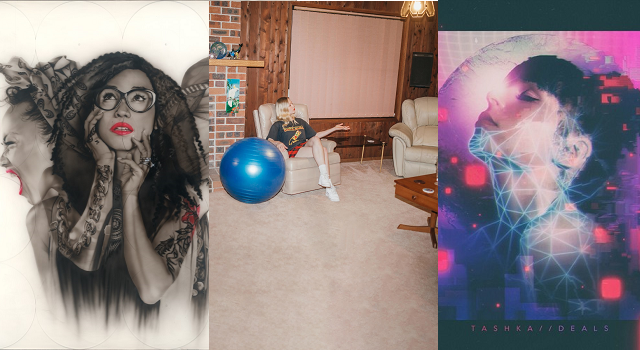 We’re back! MickRad has been on a bit of a hiatus as I’ve settled in to my new job, but there’s been so much music circling around my head, I just had to get it out!

Over the last few weeks I have been diving into new singles, EP and albums as I commute back and forth from work and a few have really stood out.

Firstly, if you’ve ever seen L-FRESH The Lion live, you’ll have seen the amazing Mirrah Fay Parker. She is not only the best hype-woman you’ll ever see, but she sings, raps, rhymes and dances and has released her debut EP, Life. It’s a celebration of the every-day and is bathed in positivity, hope and passion.

With a California tinged accent and bubbly disposition, Mirrah is able to make you smile on the hardest of days. The slow soul groove on Reasons sets the chilled mood before We Wanna Know kicks it up a gear allowing Mirrah to show off her rapping skills alongside L-FRESH. Her delivery hits the mark with it’s message and then her melodic vocal takes it to the next level. How many rappers do you know have such an angelic voice?

This EP delivers in all of it’s five songs. Get on the ground floor with Mirrah and enjoy the ride. It’ll be a fun one.

Sometimes you just hear a voice that almost brings you to tears straight away with his pureness, warmth and tone. Julia Jacklin has all of that and the ability to write a song that evokes whimsical imagery of the world around us through the eyes of someone that appears to notice the little things.

Her debut record, Don’t Let the Kids Win, delves into some true folky depths but it’s delivered beautifully and simply. To start with, listen to the opener, Pool Party. If this doesn’t pull you into the album, then you’re a harder person than I.

Motherland speaks of her regret and yearning as it steps into an alt-country feel. It’s ok, embrace it, let her pure voice roll over you like a cool breeze. The title track finishes the album with the refrain;

It’s a strange, but uplifting finish to an album that generates the feels along with that well of optimism from the pit of your stomach that music like this can be generated from suburban Sydney.

There is no shortage of electronic artists now-a-days. Some songs come and go and some songs just make you stop and listen. I was flicking my way through triple j unearthed tracks the other day and I heard this track and it made me stop and listen.

Tashka is a electro-pop producer out of Sydney with some very, very nice vocals and equally prime production skills. I’ve been toying aroung with the DAW, (Digital Audio Workstation) Ableton, for a few years and have created some dodgy beats, but Tashka has obviously perfected the art with some very slick backing to her tunes.

Not that it’s all about the production. Her first song, Untitled on her debut EP, DEALS, sees some delicate keys to set you into the mood..and layers. Man, it’s all about the layers. I see audio production as the ability to tie in a bunch of sounds in a way that is pleasing to the ears. Simple enough? Not necessarily, but Tashka has the ability to bring in some ingenius little blips and bloops and sounds that fit into her sound.

..and then her voice chimes in. Damn, she gives it. Have a listen to Upside to see what I mean. She can blast out a chorus with some hella passion. Need is a track that explores some RnB influence with some bass funk and clever organ and backing vocals.

Get lost in Tashka’s sound and look out for her around town to soothe you into a Summer’s day..